Could It Be My Thyroid?

I routinely hear from patients in the office, “Could it be my thyroid?” It could be. But usually that’s not the real blame for weight problems. It is however, something to try and understand. It’s commonly a problem, especially in women. When it gets treated people feel so much better. 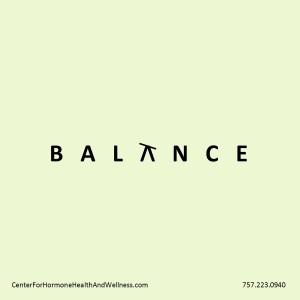 With all hormones, balance is absolutely key! If you balance one hormone, potentially you can throw off another hormone. You don’t want one working too well and the other not working well enough. Hormones come from endocrine glands. There are lots of different endocrine glands. They all produce different hormones. The endocrine glands are found throughout the body. There are lots of different glands in the body: pancreas, testis, ovaries, and more. A hormone is simply a chemical messenger. They communicate between one part of the body and another. The tissue that makes the hormone releases the hormone into the bloodstream. Subsequently the hormone goes throughout the body. The tissues that have receptors can receive the message. It’s that “Lock and Key” type of thing. It needs to fit well into the receptor in order to send the message. Hormones are one of the main tools your body uses to maintain homeostasis (balance). Hormone balance is a key concept. It’s especially true with Thyroid Hormone.

The thyroid gland sits in your neck. It’s below the “Adam’s apple.” It’s one of the largest endocrine glands. The thyroid comes from the Greek word for shield. It’s protected and covered by some of the neck muscles. The parathyroid glands are adjacent to it. The parathyroid glands influence your bones but they don’t really influence your overall metabolism. They are adjacent to the thyroid glands. The function of the thyroid is directly related to metabolism (how your body uses energy). This is what drives your metabolism—whether it’s slow or fast. This is what overseas our metabolic rate. When someone talks about a slow or fast metabolism, they are alluding to their thyroid gland. If you looked under a microscope at a slice of your thyroid tissue you would see these open areas that have food in there. That’s the thyroid hormone. If this goes out of whack potentially you can get thyroid disease.

A balanced hormone means there’s good communication between different areas. The hypothalamus talks to your pituitary gland. The pituitary gland talks to the thyroid gland. Then the thyroid gland releases the thyroid hormone. There are multiple layers. They are like multiple feedback loops. One of these hormones in the loop feeds back on the other. So you don’t want to get too much of any one thing there. It’s also very dependent on appropriate iodine intake. Iodine is essential for life. It’s utilized by every single cell in your body. The thyroid uses about 3 mg every single day. The breast tissue uses a couple milligrams every single day because the breast is very receptive to iodine. It’s very important in breast function. Iodine has been added to salt. The iodized salt is one of the only ways we get iodine. 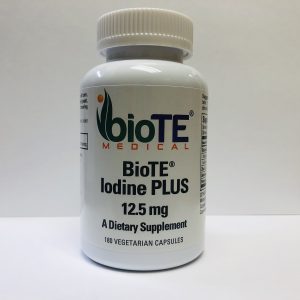 Unfortunately the iodine that’s in the salt can vaporize. Once the iodized salt container has been opened the iodine can vaporize. We often don’t get enough iodine because it’s been released into the atmosphere. It’s very common that people don’t get enough, especially Americans. Iodine used to be added to a lot of different foods. It’s been taken out of a lot of foods and substituted with bromine. In Europe bromine is illegal. The receptors for bromine are very similar to iodine. So if you’re exposed to a lot of bromine eventually the iodine receptors get blocked and then, subsequently even with the iodine, you’re not utilizing as much as you could. Iodine is very important to the thyroid. If you don’t get enough it can lead to goiter. Cysts form because the tissue is trying to work but can’t due to lack of iodine. The cysts can turn into a goiter. They can be very noticeable or very small. Eventually the thyroid could have to be taken out.

Is your thyroid functioning normally? TSH is thyroid stimulating hormone. It’s made by your pituitary gland in your brain. The thyroid functioning test is a screening test telling. It doesn’t tell us how well your thyroid is working. If the pituitary gland makes a lot of TSH it basically means your pituitary gland is screaming at your thyroid to get it to work. It often means the thyroid is not working well. That’s a sign of hypothyroidism. If the pituitary gland doesn’t make much TSH that means the thyroid is working like crazy. You don’t need to tell it to work anymore. That’s often a sign of hyperthyroidism. Again, the thyroid function test is really a poor test. What’s important is not what the brain is telling the thyroid to do. What’s important is what the thyroid is actually doing. To know what the thyroid is doing, we look at the thyroid hormone. The working thyroid hormone is T3. It’s called free T3. What this has to do with is how many iodine molecules are on that thyroid hormone? T4 is levothyroxine. T3 is missing an iodine. Synthroid is synthetic thyroid. The issue there is that if you’re taking synthroid, you’re not taking the working thyroid hormone, T3. Subsequently your body has to convert it to the T3. Some people don’t do that well. If you don’t do that well synthroid (levothyroxine) might not be a good choice. The reason we would give you T4 and not just T3 is because the T4 is much longer acting. Therefore it’s just one dose a day. T3 is short acting and you have to take multiple doses. Most people will continue to take the T4 and convert it to T3. I want to know what your TSH is (for the thyroid function test). But I also want to know what the free T3 is because that’s the true working hormone. All the others are just working up the working hormone. The T3 is what’s telling all the cells in your body how to act. How do we look at the thyroid physically? We can do an ultrasound or radioactive iodine. Often an ultrasound is a better way to look at the thyroid.

The TSH is coming down from the brain and tells the thyroid gland to release thyroid hormone. The level will change depending on what it needs to tell the thyroid. If it’s telling the thyroid to release more, the volume goes up. If it’s telling the thyroid to release less, the volume goes down. The T4 is converted the T3, which then tells all the cells what to do. The T4 could actually make what’s called reverse T3. You don’t want to make this. It’s kind of a mirror image of T3. The mirror image of the T3 doesn’t function like the actual T3 does. Reverse T3 really doesn’t do you a lot of good. Some people take the T4, and instead of converting it to the T3, convert it reverse T3. Subsequently you’re thyroid doesn’t work well. But it may not show up on that TSH screening test.

Lots of thyroid symptoms go along with abnormality. The biggest thing we’re worried about is hypothyroidism. If you’re truly hyperthyroid you usually don’t have a weight problem. The symptoms with hypothyroidism are numerous and vague. That’s where the problem comes in. Because they are vague, we just don’t think about these things. For example, there are a lot of reasons to be tired. You might lose some of your eyebrow hair. You might get a puffy face, enlarged thyroid gland, or be hot or cold all the time. Cold intolerance is a symptom. You could be tired all the time, have dry skin, menstrual cycles are way off, weight gain, constipation, or brittle nails. Unfortunately a lot of these symptoms are very vague and don’t necessarily point at any one thing. It potentially can be hypothyroidism. There are some overlap symptoms that go with both hyper and hypothyroidism. Part of the problem is how we sort all these things out. Again, we look at those thyroid function tests. 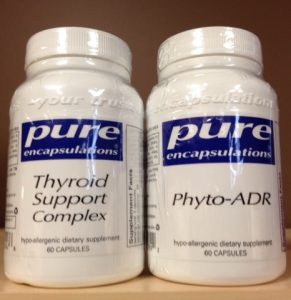 What do you do if your thyroid is not quite abnormal enough to be on thyroid medication? One thing is iodine. It can help. Most Americans don’t get enough Iodine. There are some thyroid support supplements. We have them here is our store. You can also find them in health food stores. They usually have some B vitamins in them. They also have extra zinc, selenium and some herbal things as well. Typically there are some things you can do for supporting the thyroid. Again, we can’t live without iodine.

➥ Register to Get Started!